“At one time they were Alaska outlaws, rebels or cons, bucking the establishment, living outside the law or swindling Alaskans with old-fashioned luck and charm. Here are 52 of Alaska’s most famous firebrands and deviants, those who took the Alaska spirit of independence and defiance to the next level, and made us cringe, laugh and cry.”

The idea for Alaska Outlaw Cards was sprung sometime in 2007 in Anchorage, Alaska amidst a major local corruption scandal featuring a large cast of colorful Alaska characters. Grab your history books and you will find that this has been a long-time state tradition: swindling, bribing, cheating and otherwise bucking the establishment in uniquely rebellious Alaska style. Hence, the Alaska Outlaw Cards were born.

A limited printing of 1,000 decks the first edition was released in December 2008. It was an immediate hit and sold out within one week. Two more printings of the 1st Edition were made for a total print run of 15,000 decks. 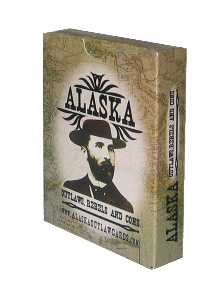 The 3rd Edition was released in 2011 and featured another new 17 outlaws with updates and new jokers/insert cards. Printing was 10,000 decks. 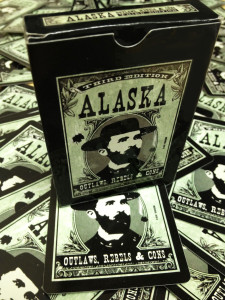 The 4th Edition was released in April 2016, featuring new outlaws, jokers/inserts, and updates on our old favorites. Initial limited printing of 5,000 decks.