Since the first edition of Alaska Outlaw Cards were released in 2008, they’ve cause quite a stir. Here are some of the news stories, feedback and reactions that make it into our Outlaw Hall of Fame & Shame.

“There’s a new edition of the “Alaska Outlaws, Rebels & Cons” playing cards out and it’s even more fun than the first one.” –Alaska Dispatch News article

“ANNOYING: Sarah Palin may be the biggest beneficiary of the ever-irrepressible Sarah Palin industry. But she isn’t the only one cashing in: Alaska Outlaws, Rebels, & Cons cards – $9.95. Sarah is the queen of clubs; Levi is the jack of hearts”

”I don’t know what enterprising soul did this, but they deserve my money. Alaska Outlaw Playing Cards. Brilliance!” –Mudflats Blog, December 2008.

What the Outlaws & Rebels are saying

Late Alaska legend Wally Hickel is featured as the 7 of Clubs in all editions. We slipped him a deck of cards; he wrote back a nice letter: 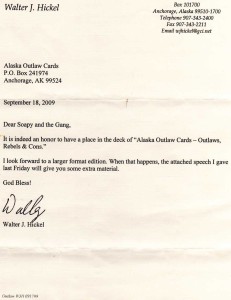 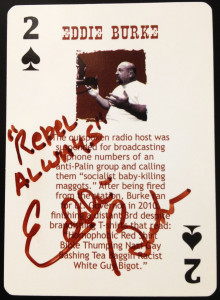 P.S. And some have called out the factual accuracy of the cards. We offer an open challenge to anyone (and always have), that we would send 7 decks of cards (Joe Sixpack), or a $100 to anyone that can prove a fact wrong. Nobody has.

“Love the idea of your Outlaw cards, but was sad to see a lot of historically incorrect information. Am trying to figure out if it was just bad fact-checking, or intentional lies. Either way… it was sad to see. Hopefully people outside our great state aren’t stupid enough to believe everything they read.”

“Gentlemen (and I use the term loosely),

…why must you join the press in smearing this symbol of feminism and conservatism by repeating her tongue in cheek remarks, “What is it exactly the V.P. does?”, “All I ever really needed to know I learned on the basketball court” and “I can see Russia from my back porch”? People like, family and friends find it refreshing to be inspired by someone who does not measure every word like most politicians.

As the spiritual leader of the Tea Party, her presence, ultimate wisdom and leadership will soon be proven this fall in the upcoming midterm elections.

I enjoyed recently visiting Alaska in all its majesty and beauty but found it overall to be a little backward as I did your product offering.

“I saw your cards at the Alaska show last year and was impressed with the concept, BUT
My wife, who runs our shop would not have them because of the slanted writing on the cards.  I am afraid the author is too much interested in giving everything a Wild West flavor and not necessarily factual information.  Consult with some old timer Alaskans to help with the perspective.

“Hello,
This evening I was checking out at Blockbuster when I saw your hillarious cards! I really enjoyed reading the names and captions of some of alaskas greatest outlaws especially Soapy Smith. But, there is one I noticed was missing, and he may be Alaskas greatest outlaw or at least my favorite. The man who along with his friends family and neighbors conjured a twenty five foot SNOWZILLA, against the bahumbug of the city officials, risking jail time and extensive fines. The man who goes by the name Billy Ray Powers, he is the kind of outlaw who stands up for all true Alaskans.”

“I’m a former Anchorage resident, got a deck as a gift yesterday. Loved the cards, very up-to the minute, but there were a few things I noticed:

Steve McQueen — He spent the night in the Third Avenue jail, around the back side of the old federal building. There was no Fourth Avenue jail. Also worth noting that he called Anchorage a “tank town” as he was being ushered out. The city bigwigs were offended, but the truth is in those days it kinda was.

I think you could swap Sarah Palin for Larry Flynt. She’s not really an evildoer, just a pinhead.”